The bulk (no pun intended) of my interview with the Gov appears in THE SEPTEMBER ISSUE OF MEN’S FITNESS, so check it out. There is also a brief audio segment available online (see below for the links). Here are some of my favorite moments from our more than hour-long conversation.

Arnold: I do circuit training now. Five or six exercises in a row, higher reps, no rest. I just want to keep my muscles stimulated and firm. I start with cardio. I’ll do 10 minutes on the exercise bike and then do the circuit. Then I’ll do another 10 minutes and do another circuit, and so on. I’ll do five rounds. The exercises change from one workout to the next to use the shocking method. I might do one or two exercises per body part. I might do a pulldown, then a calf exercise, then a chest exercise, then a bentover row. Sometimes I’ll do 10 reps or 30 or 40 reps per exercise.

Sean: How has the fitness industry changed over the years?

Arnold: It’s improved considerably. Thirty years ago, I could be traveling for a movie and be in a hotel and there would be no gym. So I had to bring my own workout trailer. Today, nearly every hotel has a workout facility, or there’s a place right around the corner. The availability of the equipment is much better.

Sean: What is the strangest thing you’ve ever seen in a gym?

Arnold: I managed a gym in Munich that had a cigarette machine and a huge amount of beer mugs. This was 45 years ago, and nobody talked about how smoking was bad for you.

Sean: What was your all-time best bench press?

Sean: You’re passionate about fitness but also cigars. How do you square the two?

Arnold: I have never promoted cigar smoking. I enjoy cigars but I only smoke one to three cigars a week. I used to smoke more but then I cut it way down. When people ask me, “What kind of an example are you?” [with regard to cigars], I say, “I don’t want to be an example for that.” I want to be an example for living a healthy lifestyle and exercising every day, being motivated, and going after things. But I don’t want to be an example for non smoking or wearing a helmet when you ride a bike. Let somebody else do that. When I was governor, people told me I should be a perfect example, but that’s what makes politicians fake. They wear a blue blazer and a red tie and don’t smoke but that’s not really them. I never wanted to be a fake. I smoked cigars in a tent right in the capital building. Then people know who I am—they know I’m not pretending.

Sean: What do you think the future of bodybuilding is?

Arnold: I think that eventually we’ll become an Olympic sport. It will continue to grow. We promote it as a means to ultimate fitness. It’s not only a competitive sport, you can use bodybuilding for rehab, improving performance at sports, slowing the aging process, looking better, and having a quality life. Our only downside is the drug issue.

Sean: When was the last time you drank a Coke?

Arnold: I’m not into Coke. I probably haven’t had one in 25 years. I’m from Europe and we drank mostly water or beer. I never got into the soda thing.

Sean: What is your favorite of your own movies?

The role that sold a lot of gym memberships. Not to mention hand guns and sunglasses. 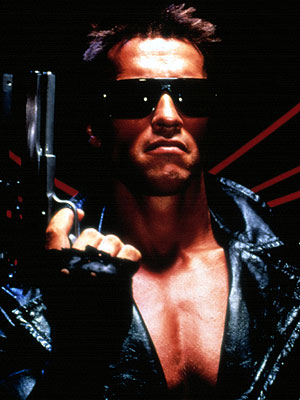 The role that sold a lot of gym memberships. Not to mention hand guns and sunglasses.

Sean: What do you think your worst movie was?

Sean: Has your competitiveness diminished at all with age, or are you still hungry?

Arnold: It has toned down a little bit. When I was young I wanted to be the king of the world. Today I would be happy with just being president.

Sean: What is the strangest request you ever got from a fan?

Arnold: To run away and get married. But he wasn’t my type. He was a little too tall.

Sean: What will set your book [out in October] apart from all the other biographies on you?

Arnold: I want to take the readers on that ride. That journey that I have taken. They will get the feeling of what it’s like to grow up in Austria after the dreams of the Third Reich have been shattered. To grow up in an environment where people feel like losers. And then to make it out of there and become the world champion of bodybuilding. I’ll take them through what working out in Austria was like, how I developed the drive and the will and the fire in my belly. Then to the United States and not speaking the language and being told I would never make it as an actor. Then what it’s like to go to Camp David with President Bush, and sit in the Oval Office, and marry into a family like the Kennedys, and then become governor. I also want to make people understand the conflicting mentalities I had. I had the Austrian mentality and then I adopted the American mentality and there was a fight between them. Then I’ll talk about how Milton Berle taught me stand-up and to tell jokes. I tried for years to stay away from it because I was never inspired to do an autobiography, but after the governorship I thought there was enough good material that will make the book truly unique.

Sean: What was the worst lie ever told about you?

Arnold: That in 1979 I shared a joint with President Obama.

Sean: Because he didn’t inhale? 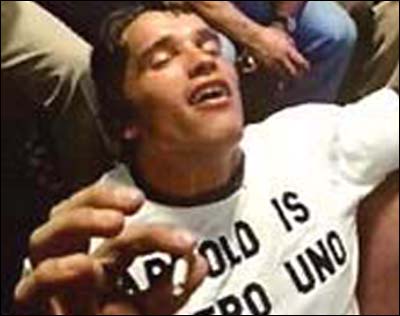 Sean: What is the hardest thing in life?

Arnold: To have a vision. People really struggle with that the most. I think that if you have a vision, everything is easier in life. If you see yourself doing certain things, it’s easier to work your way up that ladder because you know which ladder to climb. Once you know what you want to do, the how-to material is out there. I was lucky to be born as a person who always had very clear vision. It’s hard for me to explain it to people. Vision makes you able to go through pain, crying, and ups and downs, because you know what it is for and where you’re going toward.

Sean: There are a lot of prank phone calls on the Internet that use lines from your movies. How do you feel about them?

Arnold: I think they’re hilarious and creative, and I wouldn’t want to be on the other end of those calls. You hear some innocent girl answer the phone in some shop and say, “Can I help you?” And then all of a sudden you hear a voice say, “This is John Kimble. Who is your daddy and what does he do?” And then she says, “My daddy is working as a driver.” Then it’s, “Answer the question!” And she says, “But I did. Who is this?” And I say, “It’s John Kimble. I’m asking the questions.” The people get so flustered [Laughs]. I laugh many times when I listen to those. It’s very entertaining.

[[At this point, Arnold asked ME a question. About Carb Back-loading, the diet strategy by Kiefer that I’ve written so much about. Apparently, his staffer had read about it on this site and relayed the information to The Oak himself. It piqued his interest, so he asked me a few questions (and wanted to have them answered immediately ;-))]]

Arnold: What’s the story with your carbohydrate back-loading? Daniel was telling me about it and I didn’t understand it. He’s a fanatic workout guy so he knows all the latest terminology that appears on the Internet. He told me about the carb back-load thing.

Sean: Yeah, the idea is just to not eat carbs in the early part of the day, and then after you train, load up on carbs. At that point, if you train in the afternoon or evening, you can get away with a lot more so-called bad foods than you could if you eat them in the morning because your muscles are more sensitive to absorbing carbs at night after you train.

Arnold: What do you mean they’re much more sensitive? You mean they don’t absorb as many carbohydrates at night?

Sean: They actually absorb them better. If you eat carbs earlier in the day, like if you have a bowl of oatmeal for breakfast, the way the hormones in the body work, you’re more apt to store more body fat from those carbs earlier in the day. But if you wait till later in the day, like four to six p.m., and then do some heavy weight training and then eat your carbs, they’ll more likely be shuttled to the muscles and then they won’t be stored as fat. Cortisol levels come down over the course of the day and your insulin sensitivity is higher after training. So it’s a good way if you want to have more of a relaxed diet and eat more junk foods and foods you like and not be so strict. If you can time your carbs later in the day after your training, that’s the way to do it.

Arnold: Franco and I, the week before competition, used to go to The House of Pies and eat pies at night. But we did not know what you just said. Instinctively, we just felt like we needed the pie. Other bodybuilders would say, “You guys are crazy, it’s going to smooth you out. You’re going to fuck everything up with your diet and lose the competition.” But after dieting, we couldn’t even think straight. So we would go like an addicted couple and devour our pies just like animals. They were usually cherry pies. We’d be so happy walking out of there, like we had our fix. But it was always at night, like 8 or 9.

Sean: Sounds like you invented carb back-loading and you didn’t even know it!

Arnold: So many times we do things and now when you explain it maybe that’s the reason why it didn’t have the bad effect that everybody was worried about

Check out Arnold’s own site, which covers fitness, movies, politics, and more, HERE.