People hate me. Aside from the fact that I often make inappropriate jokes, dance badly at parties, and have no patience for loud dogs or annoying children, I can eat anything—and in large amounts—and not gain weight.

It’s almost like a superpower, only, like all superheroes, I see it as a blessing and a curse. I’m grateful that I can go way off my diet and eat a pizza or two in an evening if I choose, but it never seems to help me gain weight. And if it does, I don’t store it as muscle.

Yes, when I was a teenager I was the “ripped ectomorph”. I had a six-pack in high school eating a typical high school diet of cafeteria food and cheese doodles. I had no other muscle, mind you, but I was very lean and sported visible abs. I started gaining weight by pigging out in college and, whenever I wanted to bulk up a bit any time thereafter, that seemed to be the only way I could do it. I tried all the bodybuilding diets for a time but I never seemed to be able to get down enough calories to grow. Not by eating clean food anyway. And when I ate badly, the weight I did gain was split between muscle and fat. So before you hate me any more for having “great genetics”, realize that overeating junk doesn’t work for me either.

This spring, I tried again, promising myself I’d gain with clean food only, as healthy as possible.

It’s been a struggle to say the least.

I started by setting up some macros for myself. I followed Nate Miyaki’s recommendations (read about them in the interview we did HERE). One gram of protein per pound, 20% of calories from fat, and the remaining calories from carbs. As for total calorie intake, I started with 14 per pound. I figured this was being a little conservative, given my fast metabolism, but at 31 years old, I also imagined it had slowed down a little and I should take that into account.

Nothing happened. Not an ounce gained.

Only when I cranked it up to 18 calories per pound (about 4,000) was I able to make some progress. Now eating this in pizza is a bit tricky but eating it in rice, sweet potatoes, and chicken—i.e., clean food—is the challenge of a lifetime. Especially when I have a relentless job and little time to prepare food.

The following are some desperate strategies I’ve used to gain weight that have worked and kept me from getting (much) fatter.

Then eat it some more. Keep going. This is the #1 food for desperately skinny guys. It’s perfect because it’s easily digestible (unlike brown rice which can go right through some people), it doesn’t fill you up (so you’ll be hungry to eat more), it goes well with most meals, and it’s a great source of carbs. Now it’s true that white rice is nearly devoid of nutrition—it’s basically just going to muscle glycogen and not doing much else—so it’s best not to eat it as your only carb food. (Not that you’d want to—the lack of variety when you eat clean is bad enough without cutting down on your menu even more.) Mix a few kinds of potatoes and possibly some oats or another gluten-free grain in there and you’ll have a good profile of carbs. But white rice should be a mainstay.

Douse it in hot sauce, top it with stir fried chicken or beef, or shake some salt, pepper, and garlic powder on top of it.

LAY OFF NUTS AND OILS

These are packed with calories, which makes them tempting bulking choices. You can certainly eat them to help things along but you can’t let your fat get out of control. It’s carbs that impact insulin and therefore have the biggest affect on muscle growth. Also, overuse of fats throws off your ratio of omega-6 to omega-3, and that leads to inflammation. I used to pour olive oil by the cup full into shakes and have a big bag of nuts on my desk all day long (referred to as “Sean’s nut sack” around the office). No more. You gotta reign it in.

Like a lot of other desperate, skinny fools, I used to put ice cream in shakes to sweeten them while adding calories. Anyone who does that is obviously rationalizing a way to eat junk and call it an essential part of his “fitness” plan, but the flawed psychology of bulking up is a post for another time. If I had just thought about adding sweet potatoes to my shakes, I might have saved myself some blubber and taken a load off my arteries too.

Microwave a sweet potato until it’s soft and blend it up with your protein powder, almond milk or water, etc. It adds a lot of sweetness as well as healthy calories. If it comes out too thick, just add more water till it’s a smoother drink.

Incidentally, this works with white rice too. The rice’s natural sweetness isn’t as potent as a sweet potato’s, and the mixture invariably comes out lumpier, but it’s still pretty good. 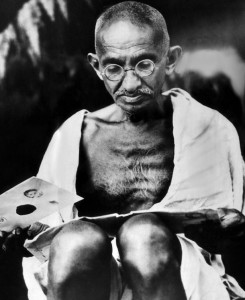 Gandhi was a great hero. But he didn’t eat enough.

It’s a hot topic these days and I love it for fat loss. But if you have trouble gaining weight, it’s only going to make matters worse. Think about it: gaining weight requires eating more than you normally do. How can you do that when you’re FASTING??
Truthfully, I think there are people who CAN gain weight by eating a ton of calories in a short window of time, as in they fast in the morning, eat light around lunch, and stuff themselves at dinner. Nate Miyaki’s clients have had success with this, as have some of Kiefer’s, Ferruggia’s, etc. But this won’t work for the ectomorph. You’ll get full and need to go to bed before you’re ready to eat again. And I don’t care how much you have to eat, getting four hours of sleep a night to accommodate your feasting isn’t good. You need rest to grow muscle, too.

And while we’re on the subject… I don’t like the idea of setting an alarm to go off in the middle of the night so you can get up and eat some more. I can’t say I’ve ever tried it and I know it works for some people but I think sleep is too precious. I have enough trouble sleeping a full night without waking up as it is. If I scarfed down a chicken breast, I’d never get back to sleep. Do what you gotta do in your waking hours but give yourself at least seven to sleep. Your digestive system needs the rest even if your mind and body aren’t feeling it.

I know that eating carbs for breakfast can lead to fat gain. But when you have 500-plus grams to eat in a day like I do, you better start early. Just keep them clean and mix them with other food. That’s all you can do. And remember your goal. You wanted to gain weight. That always entails eating more than you’re used to, i.e., more than you’re comfortable with and more than will let you stay lean. A little fat gain for a lot of muscle isn’t a bad trade.

One other thing here. Most people get busier as the day goes on. Work projects take longer than you expect, you get stuck in traffic, and social obligations intrude. This may cause you to miss a meal or get less food than you need or the wrong kind. For these reasons, the earlier you get after it, the better.

EAT THE SAME MACROS EVERY DAY

Some people cycle their carbs and calories. They’ll have a high day, a low day, and sometimes even a medium day—the goal being to get an overall caloric surplus in every week but spend some days letting the body burn fat. Like with IF, I know this can work but it’s complicated. I don’t know anyone who has the time to plan their meals like that. You’d have to mark a calendar.

“Well, I have to go to my aunt’s house for dinner tonight, so I should make this my high day.”

“I could cancel it out with a low day tomorrow but I’m squatting, so that doesn’t make sense.”

“When should my medium day be?”

And good luck counting all that up. I say just hit the same numbers every day. Or rather, try to. Life will interfere and you’ll often fall short anyway. Anticipate this and simplify things for yourself. Keep the end goal in mind and do what you have to do to get there. Once you’ve gained some weight, we’ll worry about chiseling it down with low-carb days.

Bombarding your system with food all day long is a war, and it has its casualties. You’ll be stuffed, bloated, cramping, and could develop a case of Leaky Gut Syndrome (look for undigested food in the toilet). Yeah, it’s gross and it sucks, and it also doesn’t have to be this way. Take some digestive enzymes.

Get a product that has amylase (breaks down carbs), protease (breaks down protein), and lipase (breaks down fat). Bromelain and papain help as well, aiding the small intestine to absorb food. Betaine hydrochloride can also be taken for help in breaking down protein and fat. Furthermore, it attacks microorganisms in food that can make you sick.

Plant Enzymes from Health Source has many of these ingredients and works well. Note that bromelain and papain also exist in pineapple and papaya, so eating these fruits as part of your carb intake can double as a digestive aid.

If you’ve ever seen competitive eaters down a bunch of hot dogs, you may have noticed that they dip the buns in water before taking bites. Softening breads, potatoes, and rice with a little water helps you swallow them easier and faster. The less chewing you do, the less your brain registers what you’re eating and the more you can put away without getting too full. 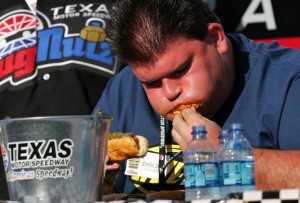 This is how it’s done.

Hey, I’m perfectly aware that this is not the healthiest behavior and can lead to indigestion. But when you set a goal, you set it with no conditions.

You say, “I want to gain weight”. That’s it. You don’t get to choose how. The method for that has already been established by nature.

But this is why people fail to achieve goals. They don’t want to sacrifice a “normal life”.

Talking to the most beautiful girl in the room isn’t normal for most men, but it’s the only way they’ll have a chance with her.

Michael Jordan practicing a hundred three-pointers a day wasn’t normal, but it played a part in him becoming the best basketball player of all time.

Eating rice all day and dipping your food in water isn’t normal. I’m well aware of that. But it works. And that’s why you’ll do it if you want to gain weight.