Bodybuilding is like sex when you’re 17. You want to do it. You try to do it. But you don’t really know how to do it—and you probably suck at it. (You also probably overdo it, but who can blame you?)

We all had to learn somewhere… (Love the author’s name, too, by the way)

For nearly every man who ever wanted to put on muscle using weights, bodybuilding was his introduction to lifting, and it usually came by way of some magazine articles or internet search that gave you an idea of how to work out but still left a lot to chance.

Nevertheless, bodybuilding seemed really intuitive (just like sex! But alas…). If you want a bigger chest, do chest exercises. Pick a bunch of different ones to work the muscles from a bunch of different angles so you don’t leave any muscle fibers untrained, and do enough sets that you leave the gym feeling tired but pumped up.

That was pretty much all the thought we put into those early workouts, and that was all we needed… for a while. But when injuries, plateaus, or sheer boredom set in, we knew we needed to think about bodybuilding a little harder.

And, as it turns out, there is a bit of a science to it that’s fairly distinct from powerlifting and other kinds of strength and conditioning for sport. It’s not a hard science, but a practical, logical approach that leads to better results. (Just like there’s a smoother, more adept way of pleasuring a woman than just doing what comes, er, naturally.) I’ve been studying programs from John Meadows and Shelby Starnes lately, two high-level bodybuilding competitors and coaches, and I’m starting to see the wisdom of training a certain way…

As opposed to just going into the gym, doing a few chest exercises to failure, and hoping for the best.

The following are some tips I’ve learned and that I now suggest all lifters employ when training for hypertrophy.

This isn’t for vanity’s sake, but for safety’s. Some kinds of workouts seem to produce a pump better than others, and some days (depending on your nutrition, hydration, and recovery) you’ll be able to pump up better than others, but you should actively focus on inflating yourself a bit every time you lift weights. Especially if you’re going to go heavy.

Performing a hamstring exercise before heavy squatting is now a staple of all my leg workouts. I do pushups or dumbbell pressing before any overhead or bench work. The reason is simply to get the muscles that work on these lifts warm and awake so that when you pile on the weight something doesn’t suddenly go wrong. Most of the time when you get injured during a squat or press, it isn’t on the last rep of the last set—it’s while you’re working up in weight. In fact, it’s often when you’re using a LIGHT weight, and it leaves you wondering why it hurt you.

There’s a science to it. About as reliable as this guy…

The reason is you weren’t warmed up enough. Pumping up with an isolation lift, or simply a non-barbell lift, prevents this, and that’s why it’s a major feature of my Truth About Strength Training workouts.

Yes, good form is important, but sometimes good form is misleading. The technically “perfect” textbook version of how to do an exercise may not actually be the best way to perform it from a safety standpoint, particularly if you’re an advanced lifter using heavier loads. There’s no better example than the bench press. Most photos depicting it show the bench being done with elbows flared and back flat. Bad idea.

Triceps pushdowns are another one. You CAN do them with your elbows pinned to your sides. But if you’re taking the set to failure or using a challenging weight, it’s perfectly alright to let your elbows drift up in front of your body a bit and use the stretch reflex to lock out the next rep. This is a lot better than forcing the elbow joints to overcome inertia over and over at the weakest point in the exercise’s range of motion—when your elbows are bent 90 degrees or more.

Since bodybuilding is largely about using higher rep ranges and feeling the muscles working rather than just moving weight at all costs, a certain amount of “cheating” is actually encouraged.

#3 Intensity Techniques: Use Often But Sparingly

Very few of us know what the hell they’re for.

The purpose of these techniques isn’t really to “bomb the muscle” and make us scream and take the workout to the brink of madness. They’re just creative ways of DRIVING MORE BLOOD into the muscles without having to use heavy weight. It comes back to the all-important pump discussed above.

For that reason, I use these kinds of tricks most often in the first exercise of the workout, before I go heavy. Believe it or not, they don’t kill your intensity on heavy squats or presses afterward. This year, research in Applied Physiology: Nutrition and Metabolism found that exercises done to pre-exhaust muscles and then followed shortly by another lift for those muscles didn’t affect strength gains, no matter what the rest period between the two lifts was. In fact, you could even argue that these techniques SAVE your strength for the big lift. Because you’re not able to load them up (it’s hard to do 1.5 reps—where you perform a half rep, go down, come all the way back up—with a 3RM, if you smell what I’m cookin’), you don’t experience anything like the neural fatigue a big squat set would bring.

The other cool thing about 1.5 reps, partials, and so on is that they save time. You could do something like five or six conventional sets to get a muscle filled with blood, or do two normal sets and then a drop set on the third—flushing it with just as much blood as you’d get in there with about twice as much work. It just speeds the pump along.

With that said, however, you want to use them judiciously. Trying to blow out every set of an exercise will certainly exhaust you and reduce the load you can use on the lift and every other one that follows. It can also cause an injury—pulled muscles or worse. So it’s best to do them on one or two sets only as part of one or two exercises in your routine. Again, I use these techniques most often on the last set of the first lift in the workout.

#4 Don’t Lock Out Your Joints

Getting stronger, or at least measuring the progress of your lifts, requires you to lock out your elbows or knees or hips on presses, deadlifts, etc. There’s nothing inherently wrong with this but when you lift heavy long term (i.e., you DO in fact get strong), you will begin to experience some joint pain. Bodybuilders, who often train even more frequently and for longer sessions than powerlifters and weightlifters, avoid this by not locking out their joints. They also do it to keep tension on the muscles and prevent the joints from taking over the lift, but I think the safety feature of this technique is most important.

If you fancy yourself a “powerbuilder”—a guy who wants to keep getting stronger on major barbell lifts but do his assistance work like a bodybuilder—go ahead and lock out on your main lifts. On every other exercise, however, cut the range of motion a bit short. Again, it’s not “cheating”, it’s being smart and doing what it takes to still play the iron game for another 10, 20, or 30 years. 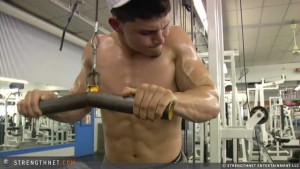 Let your elbows come up on pushdowns

#5 Stretch Under A Load

If getting a pump is the first priority of a workout, stretching the muscles with weight is the last one (but I don’t mean it’s any less important). If you did an exercise like a stiff-legged deadlift or dip early on in your session, you just might pull or pop something because the area isn’t warmed up enough yet. But in the latter third of your workout, when the muscles are pumped and protected, you should use a lift that pulls them apart a bit.

This accomplishes a lot. It builds some flexibility into your training, which most lifters lack (they don’t stretch or do mobility work, period). It also helps open up the muscles to let more blood in to further the pump. And not least of all, it can act as a growth stimulus all by itself. When muscles feel themselves going into an unfamiliar and uncomfortable range of motion, they contract even harder, and that can mean more muscle recruitment.

Smart bodybuilders do change their exercises from workout to workout, but they don’t choose lifts at random. A regular cycling of lifts prevents adaptation, but you have to pick exercises that “feed” each other and come back to the same ones once in a while to gauge progress. It’s still all about progressive overload.

Your main chest lift one week can be the bench press, then the incline press the next, followed by decline. Eventually, it has to come around to the regular bench press again, and your performance has to improve. The workouts in The Truth About Strength Training offer many variations you can cycle.

#7 Turn Up The Volume… Slowly

When most people think of bodybuilding, the key feature—if not the isolation of muscles—is the volume of work. Conventional wisdom says you need to do lots and lots of sets.

Well, you do, but not right away. And not always.

Start with as little as two or three sets per exercise and then add a few each week.Then start backing it down. You have to have an ongoing fluctuation in volume, or you’ll just burn yourself out. Bodybuilding needs to be intense and exhaust the muscles deeply, but every workout doesn’t have to be a marathon.

The last point I’ll make is with regard to rest. After high volume, most lifters seem to make the assumption that bodybuilding must be fast-paced and have you running all over the gym from machine to machine. Really, this doesn’t force growth any better than doing straight sets—just waiting till you recover and then going again. 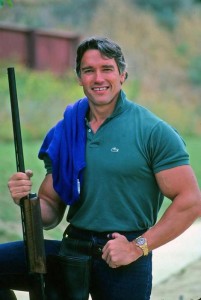 I’ll tell you when it’s time to do another set!

Brad Schoenfeld conducted a study published inSports Medicine this year that found that rest periods—short or long—didn’t make much of a difference for gains in muscle size. Other studies show that longer rests are better, simply because you can recover more strength and lift heavier weights in subsequent sets than if you’re still panting and sore.

Ultimately, as Schoenfeld’s study states, rest periods should be determined by practicality, such as how much time you have to train, whether you have a training partner, how your technique holds up from set to set, and so on.

But the lesson is clear: you don’t need to run yourself ragged.

Remember, it’ just bodybuilding. You’re not having sex.