Let’s say I’m a fitness writer/editor doing a story for a mainstream magazine or website (this isn’t a stretch of the imagination).

I’ve been assigned a topic to do an article about, or I brainstormed it myself. How about… how to warm up before a weight workout.

I need a source to quote so people don’t think I just made up a bunch of crap about warming up, so I reach out to a trainer that I know and trust. Preferably, he’s a big deal in the industry or has somewhat of a following online (so maybe he already has some clout with my readers, or his followers will discover my magazine when I do this story with him). If he can give me interesting quotes so it makes for a more entertaining read, all the better.

I try to play to the trainer’s strengths, or what he’s known for best in the industry. If it were a story about getting ripped in 12 weeks, I might talk to Tom Venuto, a longtime bodybuilder. If it were a bench press story, I might ask Jim Wendler or Dave Tate for tips on technique. Since it’s about warming up for an efficient and safe workout, I could go with Eric Cressey or Mike Robertson who have released popular DVDs on the subject. I could also ask Alwyn Cosgrove, who’s one of the most well-rounded experts in the business. (Since I’ll be referring to a story Cosgrove and I did together long ago for the rest of this post, let’s say I choose him this time.)

So I call or email Alwyn and tell him my needs: warm-up tips for men in the age range of 18 to 34. They have some level of knowledge and experience, training maybe three days a week on their own, but we still have to make things simple. We should cover what they need to do from the moment they walk into the gym on up to their first work set (depending, of course, on how many words I have for the story). I already know we should include some discussion of foam rolling, light stretching, a dynamic warm up, and warm-up sets for the main lift, so I ask him if he could give some recommendations for each topic.

A few days later, Alwyn emails me back some notes or a rough draft. The information is solid, but the writing needs to be smoothed out so it’s more accessible to a wide audience, and the word count needs to be cut down. (By the way, this is purely an example. I don’t mean to imply anything about Alwyn as a writer, nor am I criticizing him.) When he gets to the part about the dynamic warmup, he actually uses the term “dynamic warmup.” Even though I used those words when I first reached out to him, I’m probably not going to let it stay in the copy, as it sounds a little technical and may take too many words to explain what it means. Instead, I’ll probably just give readers the sample circuit of dynamic exercises Alwyn recommended, and the paragraph now looks something like this:

For instance, you might do one set of squats, pushups, good mornings, lunges, and rows in succession, rest just long enough to catch your breath, and repeat one time. 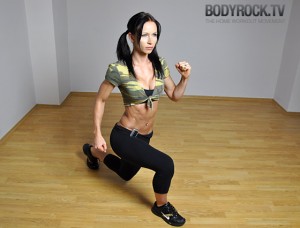 Dynamic warm ups. They look better than they sound.

But now that I’m looking at it, guys might be unclear what a good morning is, so maybe I’ll take a line to explain it or ask Alwyn if we can substitute another move there that’s more universally recognizable.

There’s also something in the story about how the right warm up can lead to a better workout and greater “hypertrophy”. But again, since this is a mainstream piece, we’ll just say “muscle size.”

I finish it up by putting in a jokey lead that references a movie that I expect most guys in the audience will remember:

In the words of Caddyshack’s Ty Webb, “This isn’t Russia”—you don’t have to do anything you don’t want to do. But not warming up guarantees you won’t perform as well during the workout, and it increases your risk for injury.

Ultimately, we end up telling readers to use a foam roller and/or lacrosse ball first thing, then do the dynamic circuit, followed by some stretching for chronically tight areas like the hip flexors and hamstrings, and then how to work up to a heavy work set. I quote Alwyn throughout the story, or maybe even give him the byline as compensation. I’ll write up a 50-word bio on him (including his website and possibly a headshot) for our directory of contributing writers/experts.