One of the questions I get most often is, “How can I become a model in your magazine?”

The short answer is, “Get an agent.” Most of the models that Men’s Fitness, Muscle & Fitness, and the other fitness mags hire are found through professional modeling agencies like Wilhelmina and Silver. But the old saying “It’s not what you know but who you know” applies too. Occasionally, one of our editors will meet a model, trainer, fireman, or athlete who’s got the right body, and even though he didn’t go through the so-called proper channels, the guy makes it into the mag. For the record, I personally don’t have much control over who the models we use are.

The process is basically this:

We have to do a photo shoot for the workouts we feature in the issue. The photo dept. does a casting for models (and I’m usually not present because I’m busy as f*@k). Or sometimes they’ll just call the modeling agent and have him recommend some new blood. The photo eds will then show me pictures of guys they like, and I’ll put in my two cents about who’s the best of the bunch and which workout (of the ones we’re shooting for the issue) the model is most appropriate for. For instance, if we’re running a chest workout that month, I’ll want to see a guy who has a big chest.

At this point, Men’s Fitness has drained its model pool down quite a bit to guys we know and like—they’re easy to work with, can handle performing the exercises we prescribe, they always come in shape, etc.

Since we relaunched Muscle & Fitness last fall, we don’t have a stable of regulars yet, but we’re working on one.

Now that you know a little about the process, let me tell you what REALLY goes down at these shoots. It’s not as glamorous as it sounds.

First of all, we use real weights. Some magazines use Styrofoam plates that are painted black and the models have to pretend to strain for the shots to look right. We don’t have that problem because we’ve got a rickety old bench and rusty dumbbells for them to do it right with. If I had a dollar for every time we’ve had an accident on a shoot, and a model nearly wiped himself out or was close to taking one or two others with him, I’d be rubbing elbows with the Sultan of Brunei.

My friend and colleague Joe Stankowski can attest to this. I used to ask Joe to come and help me tech shoots when he lived closer by (he’s now in Michigan). Joe had an assortment of muscle activation techniques and coaching pointers that helped stiff, inflexible models squat and deadlift properly for the camera. One time, we had a model we needed to do an overhead press. I asked him, “Can you get 135 overhead? If not, no biggie, we’ll put the 25s on.”

He got the weight up and just as the photographer was about to click it, the model started shaking. Joe was right behind him, ready to help the guy ease the weight down, but the next thing we knew, the model started shuffling back and forth, trying to regain his center of gravity. I’ll never forget the look on Joe’s face—a mixture of disgust (“it’s only 135, dude!”) and horror (“that’s it; I’m going to die”) as this model scrambled around frantically, trying desperately not to drop a loaded barbell on Joe’s scalp.

The model was able to control the weight and get it to the floor safely, but not before taking years off all our lives. 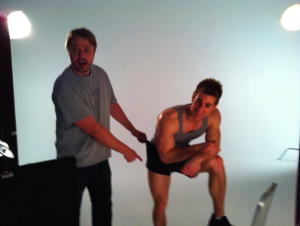 Uh… I’ll explain below. Or at least try to.

Another thing we have to deal with is baggy shorts. There’s an unwritten rule about fitness photo shoots that if a model’s shorts CAN bunch up on him, they WILL. This presents a number of problems. If he’s doing something like a deadlift or shrug, and the bar is rubbing the front of his shorts, the model will look like he’s got a boner. If he’s doing a pushup, or any other move where he’s prone on the floor, the shorts will sag and it looks like he’s dragging his junk across the floor, or he crapped himself and it needs to be emptied like a colostomy bag.

Our photo director. Clipping the model’s shorts so they stay in place, or abusing her power? You be the judge.

I don’t tell these stories to frighten off prospective models, but simply to call attention to the many hazards and hardships you’ll encounter in the world of fitness photography. Remember, only the strong survive.