Everybody wants to deadlift, but most probably shouldn’t. I’ve seen more successful pick-ups in gyms than I’ve seen properly performed deadlifts, and most of those ended less painfully, too.

There’s nothing inherently wrong with the conventional deadlift. If you can perform it correctly, particularly when the weight gets heavy, more power to you: it’s a great exercise that’s going to build your legs, your back, and your grip, and make you bigger and stronger overall. But for most, it’s a back-breaker—injuring them (moderately or severely) within the first few times they try it, or down the road when they get good at it and go heavy. 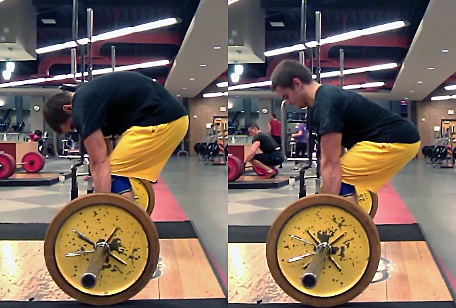 Round-backing the weight up can help you lock it out. But usually at a price.

Of course, there are ways to make it safer. You can perfect your form, but that may not be possible if you don’t have a qualified, experienced coach to watch you train. You can work on your hip and ankle mobility so you can reach the bar better and hold an arch in your back as you pull it off the floor, but if you sit at a desk all day for work, you’re really fighting an uphill battle—you may never get mobile enough to really pull safely. Lastly, you can cycle the deadlift in your training, replacing it with easier exercises occasionally and limiting the times you go heavy on it.

But sooner or later, your back is probably going to give out.

And it only has to happen once for you to spend days, weeks, months, or possibly even the rest of your lifting life feeling the repercussions, which can range from lower back spasms to herniated discs in the lumbar spine and sciatic nerve pain.

Now if you compete in powerlifting, I’ll shut up. You understand the risk and I’m sure you’re doing everything you can to prevent an accident. But if you’re a CrossFitter or just a powerlifting-influenced recreational gym rat (like me) who’s obsessed with making the bar bend, you should open your mind to safer long-term options.

As more and more lifters in the past few years have complained about deadlifts injuring them, strength coaches have moved toward recommending the trap bar deadlift to replace it.

The trap bar deadlift is one substitute, but not the best one.

The trap bar, also called a “hex bar”, is shaped like a hexagon, allowing the lifter to stand in a space inside it and grasp a handle on each side to lift with. This keeps the bar’s center of gravity closer to your body so your back doesn’t have to bend forward, as it does in a conventional deadlift, risking lower-back injury. The range of motion is also a little shorter, so that helps relieve the back as well.

I agree that the trap bar is a good option for these reasons and is generally safer than doing a conventional pull. However, it has its drawbacks too.

1 There’s space between your body and the front of the bar. Unlike with a conventional deadlift, where you “hump” the bar on the way up and know the lift is complete when you feel the front of your hips smoosh into it, you don’t get that kind of feeback from a trap bar. It’s very easy to overextend your back at the top—leaning back instead of using your hips to complete the lift—and that puts the back in jeopardy again.

In effect, you’re facing the same problem you tried to solve by using the trap bar in the first place, only from a different source.

2 The trap bar is hard to balance. You can’t use a mixed grip on it (one hand over, one under) so your grip will always limit the weight you can use and the bar itself will tend to tip forward or back on each rep. It can actually shake you out of position, which risks injury again.

3 It doesn’t do much if anything for your conventional deadlift. The trap bar puts more emphasis on the quads than the posterior chain, so while the move is called a “deadlift” it really works more like a squat, which is why you often see it used as a squat substitute in programs. Many a deadlifter has switched to using the trap bar to give his/her back a break, only to discover months later that their conventional deadlift strength fell off considerably when they returned to it.

Now if you don’t care about EVER doing conventional deadlifts again, that’s fine. But if you do, the trap bar isn’t much of a help to you.

4 Trap bars can be hard to find. If you’re lucky your gym might have one—just one—but the sleeves are probably too short to load anything more than 4 plates on (which may seem like a lot now but it won’t be after a year or two of steady trap-bar deadlifting). On the other hand, every gym has multiple straight bars.

The Deadlift That Doesn’t Kill You

The most obvious solution to your straight-bar deadlifting dilemma is to simply shorten the range of motion. While it might be less manly than pulling off the floor, there’s no law against placing the bar on a rack or some mats so it sits just below knee height. Doing rack pulls will work most of the same muscles and allow you to go heavy without a major risk to your spine.

But if you want to still feel like a bad mofo, lift heavy, lift from the floor, and train in a way you see in lifting contests, consider learning the sumo deadlift.

Most people avoid it because it’s a little difficult to learn and feels awkward at first. And it certainly looks awkward. But if I had to guess I’d say it’s the most widely used deadlift of any option, at least by experienced powerlifters.

Ed Coan, Louis Simmons, Dan Green, Mark Bell, and many other highly successful and influential powerlifters have used the sumo as their mainstay, even arguing that the strength you build in your hips will transfer well to the conventional deadlift (while the reverse is not true—building your conventional dead won’t do much for your sumo).

The main benefit to pulling sumo is that it doesn’t put your back in anywhere near the jeopardy that the conventional dead or trap bar do. Because your feet are spread out wide, the bar can be pulled in closer to your hips. Subsequently, your torso stays more upright and you avoid shear forces on your lower back.

You can also use it more frequently than the conventional dead for this very reason. Your lower back doesn’t get beat up so you can do it every week without much risk for injury or burnout. And the more you practice a lift, the better you get at it, and the stronger you become on it.

The sumo dead does put more stress on your glutes and hamstrings and less on your quads, so you should account for that in your assistance work. It also shortens the range of motion, so be sure to do plenty of full-range hamstring exercises elsewhere in your workouts. But in a face-off of deadlifts, I believe the sumo gets the nod.

Here’s how to do it:

The biggest problem with the sumo is that it’s tough to get the bar off the floor when it’s heavy. Because your hips are so close to the bar and your knees are pretty bent, you don’t have the greatest leverage to pry it up with. You’re really pulling from a dead stop. (Well, it is called a “deadlift” after all.)

But you can be pretty sure that unlike with the conventional dead, once you get the bar an inch above the floor, it will continue its journey to lockout because your legs will drive it up. On a conventional pull, you can break it off the floor and then round your back halfway up, doing damage to your back at any point from there on.