I came to a pretty important conclusion about my diet this week. I eat too much oil.

You see, I LOVE fat. Long before I knew anything about low-carb diets, Carb Back-loading, or the health benefits of eating fat, I always gravitated toward fatty foods. In fact, I think that’s a big reason why I’ve enjoyed diets like CBL and other low-carb approaches and why I’ve done well on them. That kind of eating just suits me.

Talk about “pouring it on”.

It’s not that I don’t like sweet foods. I very much do. In fact, giving up or at least really restricting fruit was very hard for me when going low carb. But given the choice between giving up sweet foods and fatty foods for an extended period, I’ve always leaned toward abandoning the sweet stuff.

It’s been so long since I’ve gone a week without cheese, beef, bacon, nuts, avocadoes, coconut oil… I can’t really remember and don’t much want to.

But it’s occurred to me lately that I’ve been overdoing it on fats. Especially when it comes to oils. I haven’t really considered just how much oil I take in for a long time, but I know it’s a lot.

It started years ago when I was painfully skinny. I read up on gaining mass and one of the frequently-given recommendations was to add olive oil to protein shakes. Another was to eat nuts throughout the day (ask my co-workers about Sean’s famous “nutsack”—it’s the talk of the office). Some powerlifters were even talking about adding ice cream to shakes! Anything to boost calories, and the more convenient and quick they were to eat and the less they filled you up, the more weight you could gain without hardly thinking about it.

Of course, like most desperately skinny (and perhaps dim-witted) young wannabe meatheads, I took this as a license to eat everything. And short of a full stick of butter, I did. I got in the habit of pouring fat on wherever I could. I even followed one of powerlifter Dave Tate’s old tricks—dipping slices of pizza into olive oil.

Why didn’t somebody stop me??

Of course, as I got older and my metabolism slowed down a bit, I got fatter. If you’ve read about my 2010 transformation on this site, you know how I cleaned up my diet and reduced fat and calories. But after that was over, I increased my fat intake again. Not to the insane level it had been at, but more than most people eat. I can’t really estimate how much fat I’ve averaged in my diet over the years, but it’s been high. For breakfast, I’d cook whole eggs in several tablespoons of coconut oil. My salads always had some kind of dressing. I marinated chicken breasts in olive oil and sautéed various fish and ground meats in other oils. I made tuna salads using imitation mayo that was loaded with safflower or grapeseed oil. On top of beef, nuts, avocadoes, and other fats—especially the ones you don’t know about that are in nearly all the foods you eat at restaurants—this was the vast majority of my caloric intake.

The problem with this, as I see it, is not the detrimental affect that fat is supposed to have on heart health. I will never become one of these fat-phobic people who cling to processed carbs in the fear that eating a steak instead might give them a heart attack. The last time my cholesterol was checked, it was barely over 100.

The problem is calorie control and an unfavorable ratio of omega-6 to omega-3 fatty acids.

Johnny Cash left the grease where it belonged. In his hair.

While I’ve still got some abs (and don’t really desire to be much leaner), I have to believe I’m carrying a little extra pudge due to all that fat intake. I don’t eat many carbs and then they’re only around workouts, so the excess isn’t coming there. It’s been said, and I’ve advocated for it, that when your carbs are down, your fat can be almost unlimited. The key word being ALMOST, not “go ahead and bathe in oil, you freak.”

Of greater concern to me is the inflammatory effect of having that much refined oil in my food. I didn’t abuse vegetable oils like most of the American population, but after reading some of Nate Miyaki’s work, I see I’m taking in more than I should.

Miyaki is a nutritionist, former bodybuilder, and trainer in San Francisco. His thinking is similar to Kiefer and Jason Ferruggia’s—so I know he’s on to something—but he believes in a bit of a more disciplined approach (he likes to count stuff). He’s into Paleo and intermittent fasting, but not to the extent that I could sum up his philosophy with those terms. In short, it’s almost as if Miyaki isn’t interested in making any money in this industry at all. He just puts out the truth, as best he can interpret it, without any branded spin. Imagine that.

He doesn’t like sesame seed or grapeseed oil, and I’ve been using both for years. The former has 137 omega-6’s to every 1 omega-3, and the latter has a ratio of 696:1. That sounds hard to make up with just a tablespoon or two of fish oil every day and four ounces of salmon a couple times a week.

This could be causing a decrease in insulin sensitivity, poor recovery, and setting me up for autoimmune diseases and overall inflammation.

But to be honest, I stand by what I’ve done. I like the low-carb approach and always will. I’m sure I’ll even go back to it. But for right now, I want to take on a new experiment, up the carbs, and enjoy more fruit.

I’m not sure how much of a challenge this is going to be for a fat-phile like me. Drying out from oils is just the first obvious step. But cutting back on nuts and fatty meats just to keep my overall consumption down will be harder. In their place, I’m going to eat more carbs (potatoes, mainly) at night. I’ll have to change the way I cook. I’ll be doing more sautees in water, broth, and soy sauce going forward. More baking. More steaming. More poaching. 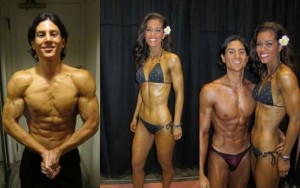 While I’m not “dieting”, I’ll be interested to see how this affects my body comp. Also, my energy, recovery, and muscularity/strength. It’s kind of the final frontier for me. I’ve experimented with so many dietary approaches EXCEPT moderate carb/lower fat, or at least it’s been so long, I’m anxious to see what happens.

Have you tried it? What was your take?