In March of this year I decided to go on a diet. As I mentioned in my last post, one reason was to support my online clients who had undertaken the program that would become the one featured in The Truth About Strength Training ebook. 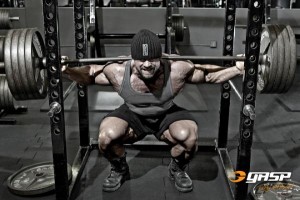 10 weeks into my diet I was still squatting more than 4 plates per side (not here—this is Branch Warren—but you get the idea.)

Another reason was because I had gotten…. well… fat. Training for a strongman contest a few months prior gave me a tremendous appetite, resulting in my developing a bit of a gut (fortunately, that’s an advantage in the sport). Then we had the coldest, fiercest winter in recorded history, which found me holed up in my tiny apartment staying warm with comfort food more often than I’d care to admit.

So when the ground started to thaw, I thought my body should as well. Time to melt off the excess.

The first step was to determine my macros. This doesn’t HAVE to be the first step for everybody—for many it’s enough to just start making healthier food choices—but I wanted to get pretty damn ripped in 12 weeks, and when you count calories and nutrients, you leave less to chance.

I used the formula described in my book and found I could eat 330g of carbs.

Let me repeat that: 330 grams of carbs. Me. Eating that much. To lose weight.

I have to admit that even I was surprised by how high the number was, but then I realized the reason I could do that was because my overall CALORIES WERE LOWER. And, as we (hopefully) all know, eating fewer calories is all it takes to lose weight.

All those carbs, along with the fat and protein I needed, translated to a lot of food. Much more than I would have thought I could eat to lose weight. And I actually had trouble getting it all in, especially the carbs. It was almost more rice and potatoes than I could handle. But how many diets out there let you shovel down foods you enjoy?

Some people like to prep food for a week ahead of time. I have gone back and forth on this and while I prefer to be prepared like that, I rarely am organized enough to do it. So, throughout much of the diet, I relied on a bit of intermittent fasting. This allowed me to get most of my food in during times when I had time to prepare it, and allowed other people to prepare it for me the rest of the time.

I’d start the day with a glass of water just to help control appetite, go to work, and fast till lunchtime (around 1:00). Then I’d go to the deli across from my office and get a few chicken breasts, a container of rice, and a salad. I dressed the chicken in mustard or hot sauce, and sometimes I cut it up and threw it on the salad. For the first few weeks, I got oil and vinegar on my salad, and guesstimated that I was taking in about two tbsp. of fat from it. As the diet progressed and I got leaner, I stopped getting the salads because I didn’t want the oil in the dressing. I relied more on stir frys I made myself to get my vegetables, and I could control the amount of oil (if any) I used. 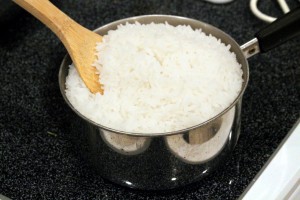 This is diet food.

I ate most of my food at night, after I had trained and was home. Eating so many carbs at once seemed to make me sleepier and actually helped me go to bed. And since my carbs were mainly from white rice, I didn’t often go to bed bloated, and I never had an upset stomach. Everything I ate digested easily.

Post-workout, I drank a protein shake and ate a banana. Sometimes two dates, or an apple instead. When I ran out of protein powder, or simply forgot to bring it, I didn’t really care. The fruit was the most important thing, and I explain why in the TTAST book.

The weight came off quickly. I did one or two days of long-duration cardio per week—30-60 minutes at a brisk pace, but no high-intensity intervals. I did yoga for an hour one or two other days per week. Apart from four days per week in the weight room, that was all the activity I got. Pounds kept coming off.

After about six weeks, I seemed to plateau. I dropped my overall calories very modestly, which meant reducing my carbs AND fat, but not protein. That put me back on track and I continued to get leaner.

My lifting was based around the squat, bench press, and deadlift. I rested as needed between sets of those lifts and rested 60 to 90 seconds between sets on assistance exercises. I didn’t do any circuits and, except for very rare occasions, my reps never went above 15 (and were usually closer to 10).

I should tell you that I did very little drinking at this time. I went out, but I didn’t stay out very late. I had cheat meals once per week but I limited them to a MEAL—not a whole day. Recovery is important, and so is consistency. 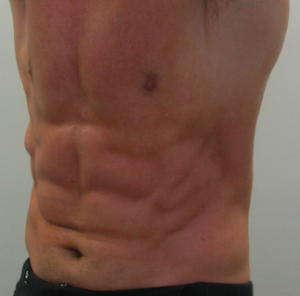 But I had plenty of moments where I fell off the wagon. On a family trip to visit my uncle in rural Tennessee, only about a month into my diet, I found I had virtually no healthy eating options. When we went out to the best restaurant in town, Ruby Tuesdays, the salad bar had more varieties of cheese than it did vegetables.

I didn’t sweat it. I cheated and knew I would make up ground in the coming weeks.

I ate bucket after bucket of rice, and no matter how you flavor it, it does get bland. (But that’s a lot better than not getting to eat any carbs at all, and having no energy.) There were times I wanted greasy or sugary food, but I was always able to hold out till cheat meals. I never broke down because my cravings got the better of me. I don’t look down on you if you cave in from time to time, but I think that when you have flexibility built into your eating you don’t get cravings so strong you go mad and eat like a hog.

The counting of grams and measuring of food did get monotonous, although I got better at eyeballing portion sizes so I didn’t have to use a food scale often. Again, this isn’t an absolute requirement for a diet but it does make it virtually foolproof, so I recommend keeping track of things.

By early June, I decided that I’d had enough. I was 204 pounds, leaner than I’d been in years, and swimming in my clothes. I had ripped abs, and I looked as muscular as ever (probably more so, since my muscles were packed with glycogen and stripped of fat), but I was getting self-conscious. 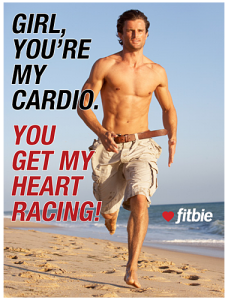 Honestly, I’m a bit of a bigorexic. I didn’t like seeing the scale so low, even if it was mostly fat I had lost. Some people were remarking that I looked “skinny”, and even though I knew they meant it as a positive, I’ve always hated that word. It was getting warm out and I had started dating a new girl and I wanted to kick back more and not make my diet and training front and center for a while. At the 10-week mark, I stopped.

That doesn’t mean I stopped eating clean and went cuckoo for Cocoa Puffs. I just stopped counting everything and allowed myself to eat out more, drink, and indulge more regularly. Even then, it took a while for weight to start coming back on.

These days, I’m not photo-shoot ready anymore but I’m not too far from it. My weight is back up to 220 and I have the faint outline of abs at all times. If I want to get super lean again, I know I can, and about how long it will take.