One of the worst mistakes you can make as a trainer is to train your clients the same as you do yourself. It’s impossible to remove all the bias you have—after all, you want to pass on the stuff that worked for you because… well… it worked for you—but you need to remember that not everybody has the same goals you had or responds the same way you did.

I recently began training people on the west side of LA where I live, and I’ve had the pleasure of learning a lot of things I thought I knew over again. Approaches that I’ve taken with these clients are very different than the ones I used when I started training (and thank God for that). 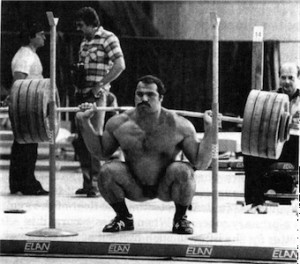 Not everybody can squat like this. But we ought to try.

I’ve got one client in particular, Meghan, who’s a total beginner. She’s 25 and in good health but she had never done a formal weight workout in her life before we met. Her goal is to lose weight and “tone up,” which a good trainer will always interpret as “eat better and get stronger.” The very first exercise I wanted to do with her was the squat.

But not the barbell back squat that I started with 16 years ago. I could tell right away that she wasn’t ready for that. Few are. And I’m open-minded enough to realize that back squatting isn’t for everybody, and it certainly isn’t a must for muscle growth and strength. But the squat movement pattern itself, whatever variation of it you choose, is infinitely valuable.

First Thing We Did

We tried goblet squats. Because the weight is held in front of the body, acting as a counterbalance to the person’s weight, the torso can remain more upright during the descent. This usually prevents the “butt wink”, a dangerous rounding of the lower back, and makes it easy to sink into a deep squat with the knees apart, activating the glutes. But after a couple sets and playing with different stance widths, we weren’t getting far.

Her heels were coming up on some reps. Her knees wanted to bow inward, and her butt was winking at me. (I winked back.)

So what did we do? Moved her over to the rack and loaded 405 on the bar for back squats, of course…

I hope you knew that was a joke.

Second Thing We Did

Judging by the breakdowns in her technique, her hips were obviously tight, so we tried stretching them. (Yes, we had already done a mobility warmup that included some glute-activation drills and active flexibility.) We hit some hip flexor stretches and piriformis stretches (these look like the pigeon pose in yoga). These loosened her up a bit but the goblet reps afterward were still hit or miss. 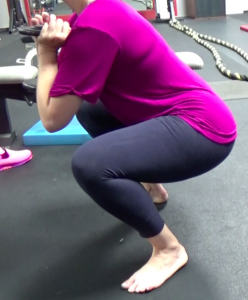 On the goblet squat, Meghan’s back was a little rounded, her heels wanted to come up, and her torso bent forward quite a bit.

We could have had her squat onto a box, but that would have deprived her of a full range of motion, which I still believed she was capable of. We also could have tried dumbbell squats, but I’m pretty sure these would have caused her to bend forward more than she already was.

Third Thing We Did – Jackpot!

Finally, we arrived at the landmine squat. (It only took a few minutes.) Load a barbell into a landmine unit—it looks like a metal version of home plate with a rotating cylinder on top—and grasp the other end. The way the bar arcs in the landmine, a person can stay very upright comfortably and get their knees tracking with the toes easily. If you get sloppy and start leaning forward, the bar kind of stabs you in the chest, so it’s an awesome (if not slightly harsh) training tool.

The result is near perfect reps all the time. If you or a client have trouble squatting—i.e., you lean forward, can’t hit depth safely, can’t get the knees to track right, or the heels come up—START DOING LANDMINE SQUATS. I beg of you. If you don’t have a landmine unit, no problem. Just wedge a bar into a corner.

We went on to do 3 beautiful sets in the 8–12 range. In another week or two I’m pretty sure she’ll be ready to graduate to goblet squats. Then from there perhaps front squats with a barbell and then, way down the road, we’ll advance to back squats.

Using a landmine, Meghan can get her knees tracking better. Her depth improves, and her shin and torso alignment are near perfect. Her lower back is in a safe position. We happy!

There are a couple morals to this story I’d like to relate.

1 Never give up. A lot of trainers just would have put her on a machine and been done with it, but I wanted her to learn a basic, “functional” movement right off the bat. Learning to squat properly means learning to move, sit, and stand up properly for all your life. What do you learn from a machine? Where to place the pin in the weight stack?

I believe pretty much everybody can do some kind of squat, and should, regardless of the goal. Find the one that works and perfect it.

2 Be a stickler. Again, it’s tempting to take the easy way out. I could have just yawned and said, “Yeah, that looks fine,” as she wobbled on every rep of goblets. I doubt she would have gotten hurt and she would have still gotten SOME training effect. But what’s worth doing is worth doing right, and learning the correct technique now will prevent us having to UNlearn a lot of bad habits later.

3 You probably aren’t squatting the best way possible. I’m probably not either. We could all use some adjustments and some cues during lifting. Truly perfect, golden, crisp-as-an-autumn-morn technique is almost impossible to come by anywhere. Even the biggest, strongest, and most proficient lifters in the world have their own way of doing things that tends to be a little off from what’s textbook.

But the point is to never stop trying. Never stop learning.

Understand this: technique matters way more than periodization, the program you’re on, or any supplement you could possibly take.

If you know how to lift correctly, you’ll lift long and get strong even if you do a million other things wrong. Feel free to quote me on that

Look at some of the strongest guys ever: Ed Coan, Kirk Karwoski, Doug Furnas, Mark Chaillet… great powerlifters who dominated BEFORE the era of heavy-duty assistive equipment. Guys from the 60s, 70s, and 80s, didn’t follow fancy programs or necessarily know much about training and nutrition at all, but they knew how to lift properly.

Before you tear your hair out deciding between 5/3/1, Starting Strength, or the Cube Method for your next workout plan, make sure you know to squat correctly.

And here’s a rundown of how:

1 Take a deep belly breath before every rep. This is how you stabilize your body to handle a heavy load. Get in the habit of this no matter what style of squat you do. If your chest rises when you breathe, no good.

2 Root your feet into the floor. My friend CJ Murphy of totalperformancepsports.com recently told me he doesn’t use the cue “knees out” for squats anymore. He tells people to screw their feet into the floor, which he thinks is much better. Grab the ground with your toes and heels like a predator sinking its claws into prey, then twist it apart like you’re tearing up a lawn beneath your feet.

I tried it myself and damn if he wasn’t right. The “screw job” pretty much guarantees your knees will track over your toes, whereas “knees out” doesn’t always work. It also activates the arches in your feet. My feet are quite flat, so doing this gets what little arch I do have firing so I have a stronger, more balanced, and more stable foot to drive up from in a squat.

Another thing this will do is get your glutes firing. Your butt cheeks should automatically clench up. This is the tight position you need to have to lift strong and safe.

3 Sit back into the descent. If you’re doing all of the above correctly, you should be able to squat deeply with everything (knees, low back, torso) in its place.

The cues will vary a bit depending on the particular squat you’re doing but that’s the gist of it.

Torso as upright as possible and in a straight line. It should never be concave (butt way out and chest way up).

Head in neutral alignment with the body.

Hips opening up (knees spreading on the descent), and hips initiating the descent.

Lower back flat or slightly arched.

If you can’t barbell back squat like this, then try front squats. If that feels funky (aside from balancing the bar on your fingertips, which usually just takes practice), regress back to a goblet squat. Plenty of big, strong guys just work on goblet squats and do fine. 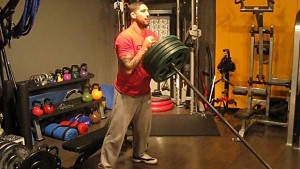 My friend Ben Bruno, who has trained former UFC fighter Brendan Schaub (shown here), uses landmines for nearly everything. Here, Schaub proves that it can be loaded heavy and used by bad-ass fighters… not just pretty women.

If all else fails, go to landmine squats. Spending a couple weeks on a simple squat variation will allow you to dominate the more complex ones down the line. Don’t push yourself faster than what your body is ready for.