In September of last year, I stopped squatting. For those who know me, this was kind of like if George Clooney took a vow of celibacy. I loved squatting, and although I wasn’t especially good at it, I relied on it as a measure of strength and progress. But the fact was, it was killing me.

Years of squatting outside shoulder width was tearing my hip in two. Now I was never a “Westside guy”, given to squatting with a super wide stance to shorten the range of motion, but I did settle into the habit of placing my feet far enough apart that I felt I could get my long legs out of the wayon the descent. Friends like Jason Ferruggia warned me about it, but I just sort of nodded and stored the advice in the back of my mind. My numbers were going up, and I wasn’t going to mess with them.

Looking back, I guess I started feeling the pain in 2009. A little pinching in my left hip, mainly when I did moves like lateral lunges or mobility drills—anything where my leg moved out to the side. It would annoy me during the exercise, but I’d forget about it by the end of the workout. By 2011, the problem had grown to a regular nuisance during squatting, and I noticed I couldn’t even rest on my knees on the floor without pain. Last year, I was in near agony.

I see a physical therapist who does ART, and that moderated it. I expanded my repertoire of stretches and mobility work, but that didn’t seem to help. I started doing yoga and, while it really helped to improve my hip mobility, it didn’t relieve the pain long-term. As embarassed as I am to admit it, I kept grinding through squats.And grinding is just what it was—a bone on bone sensation that had me wincing at the top of every rep. Worse, it was starting to spread into my right hip!

In another attempt to treat myself, I started doing glute ham raises or single-leg presses before squats. I thought that if I flushed enough blood into the hip it would loosen up and feel better—and that worked, at least until the workout was over. Later on and the next day I’d still feel it clicking and pinching. By this point, it was happening with every step I took.

Then my left knee started hurting. I didn’t want to believe it was a result of the hip but it was. I was doing an axel press with 230 pounds (a PR at least!) and as I lowered the weight to the floor I felt my knee cave in and buckle. Walking the next two days was nearly impossible.

I finally came to grips with the fact that the squat had to go—or at least the way I’d been doing it. So last September, I dumped it. Then I took a week-long vacation in Bermuda, hoping the rest would let me come back feeling fresh. Instead, I was dogged by pain throughout the entire trip. To the point where it almost wasn’t worth the money. I couldn’t lower myself into a chair without grunting. What the hell was happening to me? I was 30 years old and had the hips of Grandpa Simpson.

When I got home, I spoke to Ben Bruno, a super smart trainer in Boston who has battled through his share of gory injuries and still puts up insane numbers. He’s an expert on training around knee and back pain, so I wanted some advice on how I could still go heavy and hit legs hard without snapping my thigh off my hip like it was a chicken wing.

This is basically how it felt for a year.

Ben was great. He had me do Bulgarian split squats with a safety squat bar, which he considers one of the best and most useful exercises for building leg mass as well as strength and athleticism. I began my leg workouts with those and while I started with only a 25 on each side (which was brutally humbling), I felt like I was working as hard as ever. They allowed me to squat deep, but with my leg directly in front of me. No more forcing my knees out to get depth. Subsequently, my hip felt fine. I followed this up with some reverse sled drags. Just load up a sled and walk backwards with it to the end of the room.These really lit up my quads. I also worked in high-rep leg presses on occasion with a narrow stance. Of course, I was still deadlifting and doing glute-ham raises and other typical assistance lifts for the posterior chain.

After a few months, I not only hadn’t lost any size, I had gained a bit. My legs looked fuller, perhaps, than ever. But I still missed the squat.

I revved up my ART treatments. My doc worked on my adductors, gluteus medius, and even my calf, which greatly reduced my knee pain. I got an MRI which revealed I had two kinds of impingement in my left hip and a fraying labrum—the cartilage that holds the hip joint in place was coming apart. (I didn’t get my right hip scanned but my doctor surmised that the same thing was probably happening there too, though to a lesser degree).

Ultimately, he also discovered that my left foot was overpronating as well. This is likely attributed to the hip and was causing my knee pain. I even began to notice that when I would stand relaxed, my knee would tilt inward where my foot had collapsed (I have flat feet too). The solution was to put supportive insoles in my shoes, which cleared the pain up almost immediately.

Feeling better—i.e., I could now walk and sit like a normal person without making a distorted face—I decided to give the squat another go last March. This time I remembered what I had been told and narrowed my stance, but only by an inch or so.

I felt NO pain at all, and though I did feel less balanced, a little less mobile, and more stress on my lower back, I knew I could overcome this with practice. I started box squatting, really concentrating on sitting back and pulling with the hip flexors to protect my lower back. I did 5 sets of 5 for a few weeks to ingrain technique, and then started a modified Westside, max-effort strength program. This was good for me mentally. I rotated my main lift weekly, which convinced me that if squatting became a problem again, at least I was getting stronger on a bunch of similar exercises. My deadlift, by the way, continued to grow and had been throughout all this.

I worked on safety squat bar box squats, box squats, deadlifts, and rack pulls. My reps were extremely low. I warmed up with 5’s, then went to 3’s, and worked up to a very heavy single—near a max. I think this was also useful because it kept my technique sharp. If I had been going for multiple sets of 5–8, I might have gotten sloppy and reinjured myself. (Note that when I was using the 5×5 method to come back, I was going VERY light. Breaking form with 155 on my back wasn’t gonna happen.)

Despite the heavy weights, my joints, including my rotten old hip, felt fine. And my strength returned. My first time doing box squats for a single, I got up to 375. A month later, I hit 400. Today, I took the box away and nailed 450—a new PR, two times body weight, and a very big milestone for me. I backed off to 405 for 3, then hit a murderous set of 275 for 10.

So What Did I Learn?

Well, obviously, wide-stance squatting is not for everyone. It can wreak havoc on your hips,so if you’re not short and stocky (a natural powerlifter) or wearing a squat suit, it’s probably not for you. Or at least it’s not worth the risk.

But you know what? My doctor said the squatting WAS NOT the cause of my hip problem! It certainly aggravated it and set me back further, but apart from foolish stubbornness, there was something at play here that was largely out of my hands.

I did martial arts—specifically, Tae Kwon Do—from the time I was 9 until I was 19. And then again—this time MMA—between ages 24 and 26. Kicking, my doc thought, probably started my hip issues. Tae Kwon Do is defined by it’s kicking techniques, and I did acrobatic kicks like spinning roundhouses and hook kicks for years. I sucked at most of them because I was about a foot taller than most of my classmates, and very uncoordinated. TKD is a Korean art and the Koreans, I’ve been told, are generally the shortest of all Asian people. The torque I was putting on my hips on a regular basis could have easily started the fraying cartilage. Load a couple hundred more pounds on it with the squatting and you can see what happened. 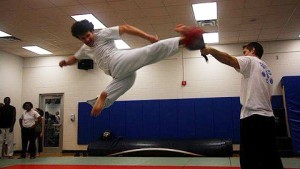 I always sucked at stuff like this. Now I know why.

I got further confirmation on this theory when I met Chris “The Kiwi” Ashenden last month. He’s a strength coach from New Zealand, and blogger at christhekiwi.com, and he told me that he doesn’t know any tall guys who practiced TKD who today don’t have some hip problems to show for it. I also had my fair share of knee, toe, and ankle injuries over the years from kicking bags and sparring. It makes total sense.

So I chose the wrong martial art. Too bad those basket-weaving classes were filled up back in 1990…

Apart from this, I learned that you just have to leave your ego behind. Of course, I’ve learned this in the past, as we all have, but you need reminders. And no reminder is quite so powerful as searing pain. I should have taken that as a hint and narrowed my stance ages ago.

Single-leg training is bad ass and should not be underrated. If you can’t do conventional “tough guy” lifts like squats and deads, give these variations a try. Even if you CAN do them, give these variations a try. You will NOT lose strength on your favorite exercises and will probably gain muscle and flexibility from them that can be applied to other exercises later.

Get ART done. Often. Just shell out the money and tell your doctor what hurts. I have PERMANENT damage in my hips, which I regret, but the pain is only when I move my leg way out to the side now. It doesn’t hurt when I walk or sit. If I had waited another year, I don’t even want to imagine how much worse off I’d be. I’ll never be able to do a full split, so Van Damme isn’t losing sleep over me taking his job in action movies, but I can do the exercises I want to do again, safely and pain free.