Everyone knows you’re supposed to train a different body part every day. So your workout split should be chest on Monday, back Tuesday, legs Wednesday, shoulders Thursday, arms Friday, and then repeat.

The more often you can work a muscle, the faster it will grow. So you should do full-body workouts that allow you to work the same muscles three or more times a week. 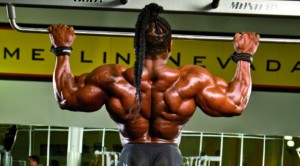 Kai Greene only trains back once a week. I’m pretty sure that’s all it needs.

Confused? It’s a debate that’s been circulating forever: “what is the optimal training frequency for muscle growth?” Interestingly, two recent studies made an effort to settle it.

The Journal of Sports Medicine and Physical Fitness published a paper looking at 30 untrained subjects who worked out for 10 weeks. They were broken into two groups: one did an upper body workout once a week and the other did the same routine twice. The exercises were standard bodybuilding fare like pulldowns and curls. Everything was done for 3 sets of 8-12, but volume was EQUATED for both groups. This probably means that loads were adjusted so that one group didn’t lift significantly more or less total poundage than the other and the researchers could get a better read on the effect of the training frequency.

The results: similar gains in both groups, regardless of whether they trained once or twice.

The journal Manual Therapy also published a finding that looked at 573 people. They were divided into 5 groups that all trained 60 total minutes, but in different time blocks throughout the week. Some did a one-hour workout one day, others did three 20-minute workouts over the course of the week. Another group did 9 sessions of just 7 minutes! (Not exactly 60 minutes but I guess they figured it was close enough.) Again, the workouts were for upper body.

The results: similar gains in all groups, regardless of how often or how long they trained. 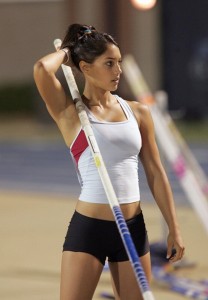 I don’t care how often she trains, as long as she continues to look this damn good.

Argument settled, right? It doesn’t matter how often you train or for how long. Just get the work in and you’ll grow. So whether you do 20 sets for back in one day and I do 10 sets for it Monday, five on Wednesday, and 5 more Friday, we’re going to gain about the same amount of muscle by week’s end (all else being equal, of course).

Now on paper, yes. And this certainly explains why one kind of split yields gains and so does another one. VOLUME STILL REIGNS SUPREME: your ability to do more work, progressively, over time, has the biggest impact on your ability to make gains. But there are other considerations, having to do with practicality, training age, recovery, and simply personal preference that have to be factored in before you pick the Holy Grail of workout splits.
Let’s run ‘em down.

Advanced bodybuilders go this route—I think—mainly because it’s a tradition. It’s what Arnold and all the other legends did, so why not? So preference is one big factor here. But looking at the big picture, it does make sense. Working one or two body parts in a session lets you bomb them with a lot of volume, which we know leads to gains, and then they can take several days to a week to recover before working again.

Bodybuilders are also usually dealing with injuries and capable of lifting heavy weights, and that means more risk of injury. So for that reason, having more recovery time, especially for the shoulders, elbows, and knees is smart. Therefore, multiple short, quick-hit workouts, or otherwise training a body part several times per week, isn’t a great idea if you’re beat up or already pretty strong or seeking maximum muscle mass. 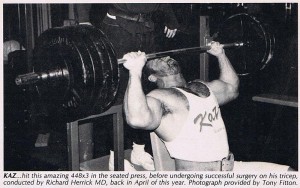 Powerlifters like upper/lower splits. Because they couldn’t do this every day.

Now we’re talking about squat days, bench days, rep upper, dynamic days, and so forth. Dividing the body into movement patterns rather than parts and prioritizing strength.

In this case, you wouldn’t want to crush your chest in one workout on Monday and do nothing else for it until next Monday. Because strength is largely a neural adaptation, it needs to be worked on with some frequency; i.e. technique must be honed. So if you want to bench more, you should probably bench Monday and then bench again Friday, or at least do something that helps your bench press go up.

Hitting the same body part three or more times a week is only sustainable if the volume is very low or the exercises you do aren’t taxing. If you work out in a park and want to get good at chinups, you could do a few sets every day. Your technique would get sharp, and, in the case of a chinup (since it’s not dangerous or being loaded heavy), you wouldn’t do much to endanger your recovery.

On the other hand, working the lower body multiple times per week, especially if you’re an athlete who’s running and jumping often, can be very hard on the hips, knees, and ankles.

Full-body plans work best for beginners who can make rapid gains and aren’t using loads that are really stressful to their nervous systems and joints. So if you’re just starting a workout plan, you might do three full-body workouts a week—these could be done as fast-paced circuits—and you’d see some quick results. 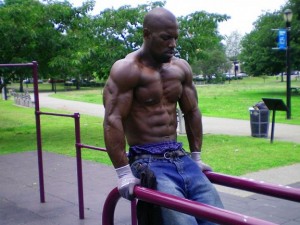 To master anything, you have to do it a lot. Like those guys you see in parks doing thousands of dips and chinups.

*THE PART YOU NEED TO READ*

Now that I’ve been over all the options, let’s discuss how to use all of them in a linear progression to become the most perfect specimen of muscle, strength, and physical fitness ever… or something hopefully resembling that 😉

If I were a young beginner today, I would do full-body workouts for a few months to get in shape and lay a foundation. Then I would decide if I wanted to achieve a particular look (gain a certain aesthetic to my physique) or be especially athletic and strong. From there, I would either go the body-part split route (aesthetic) or the upper-lower one, and probably switch back and forth between the two every few months and as needed according to how my joints felt and where I wanted to be strength-wise. Or, I could combine these two approaches in one week, as is done in the TTAST book.

I probably would not revisit the full-body workouts.

If I were a busy office worker who has trouble making it to the gym, I might go with full-body workouts with very low volume, expecting to train only two to three times a week for times ranging from 10 to 30 minutes.

In light of all this, here are the number of days in the week that I think are optimal to train, according to a goal, and assuming a typical allotted training time of 45–70 minutes.

(most only moderately heavy, some potentially very light, depending on needs)

(this is best done as two heavy days and two light ones with maybe one light additional day for one or more smaller/weak point body parts, such as arms)

(Volume is kept very low if loads are high. Volume can be moderately high if loads are low—such as body weight exercises—and then built over time)